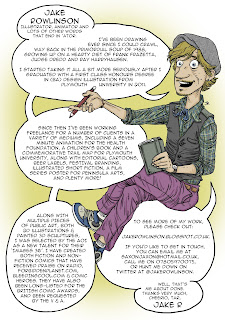 Jake Rowlinson is an illustrator and animator, currently based in Plymouth,
though he's originally from the Staffordshire/Derbyshire border.
That's in the Midlands...that's north of 'The South', and south of 'The North'.
He has created film posters, beer labels and editorial cartoons,
children's book illustrations, public murals, t-shirt designs
and non-fiction animations, as well as many self-authored visual narratives.
He was chosen as one of the New Talents for the AOI's Images 36.
His work can also be seen within the pages of Cape Fear Comics,
work that has received praise on radio, forbiddenplanet.com, Comic Heroes,
bleedingcool.com and has been requested by the V & A.
He has also been long-listed for the British Comic Awards.
His work has two strong influences of history and humour,
with an instantly recognisable use of line and colour.
He also likes to refer to himself in the third person
when writing autobiographical titbits on his website.

If you want to revive the lost art of writing, send to:
36 Didcot Drive
Marchington
Staffordshire
ST14 8LT